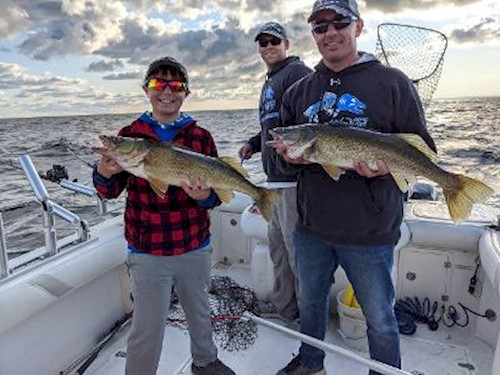 Signature Charters is operated by Capt. Mitch Shipman a USCG licensed captain, Lake Erie Licensed Guide and accomplished tournament angler. Signature charters focuses on sharing the world class Lake Erie fishery with you and putting you on the very best bites and biggest fish possible. Whether you’re looking to sit back, relax and reel in fish or get involved in setting lines and learning new techniques Capt. Mitch will ensure a safe and enjoyable day on the water. During the summer season, Memorial Day Weekend until the end of September, Signature Charters operates from a fully equipped Boston Whaler 235 Conquest out of Geneva State Park Marina. The walleye’s show up around Geneva by the end of May and the walleyes continue schooling off shore of Geneva until the end of September when they start migrating back west. Great fishing is to be had all summer. Fishing starts off trolling mostly inline planar boards with crankbaits or harnesses and transitions to dipsy divers and wire line with crankbaits as the fish move further off shore and deeper in the water column. Walleye Full Day (8hrs or limit) 1-3 people: $400 4 people $500 Summer Afternoon Trip-Departure Time ~3PM (4hrs or limit) 1-3 people: $300 4 people $400 ~Availability for more than 4 guests varies. Please contact Captain Mitch for special requests of over 4 guests as well as special kid rates. 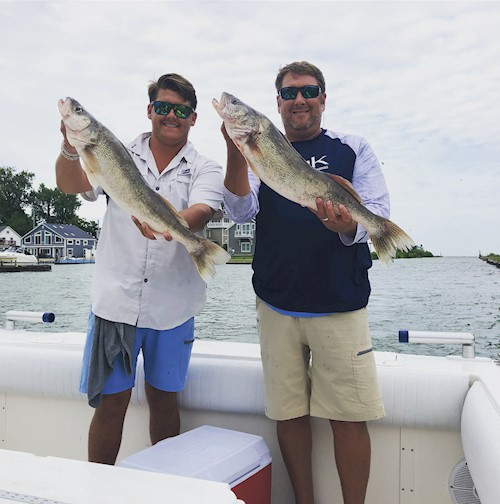 If you are looking to catch some of Lake Erie’s finest walleye, look no further! Big Johnson Charter Service is here for you to have a trip of a lifetime. Whether you are looking for a fun day out on the water with your family and friends or entertaining business clientele. Every charter is booked to fit your needs to ensure your amazing day on the water. We include state of the arch rods and reels, tackle, bait. We offer an 8 hour morning for $660 trip from 6 A.M. to 2 P.M. and we offer a 4 hour afternoon for $500 from 3 P.M. to 7 P.M. 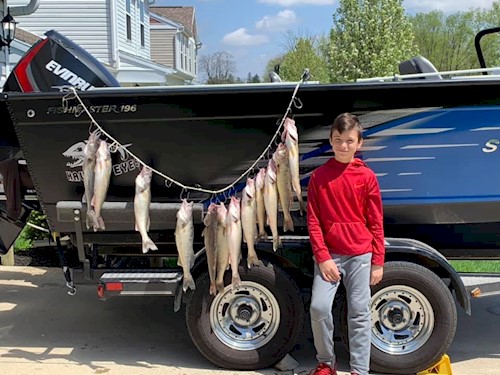 Walleye fishing is the best it's ever been. Casting or Trolling your choice. CAPTAIN Tony Hernandez, a fully insured Licensed US coast Guard Captain and Licensed OHIO Guide with over 20 years of experience fishing LAKE ERIE. HAULIN EYES CHARTERS are fully equipped with the best rods, reels tackle, bait and a Captain who does whatever it takes to make your trip the best possible. 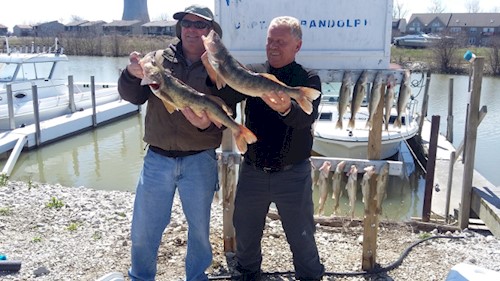 Fish Lake Erie with Captain Sib Randolph aboard "Mr. Twister". 30 Years Experience Fishing Lake Erie's Famous Western Basin. Mr. Twister Fishing Charters is a full service fishing charter company and operates on the western end of Lake Erie. Walleye fishing starts as soon as the ice has left the lake, usually around the end of March. April is a good time to cure your cabin fever. We offer discounts for our April trips as the fish are close to shore. I save on the amount of gas that I burn and pass the savings on to you. The lake produces more Walleye in April, May, June and July than any other months.

Fishing for walleye in Lake Erie, one of the most sought after freshwater game fish, is not only fun the table fare is amazing as well. With generous bag limits, Lake Erie is home to the most productive walleye and perch fishery in of all the Great Lakes combined. Because of record walleye hatches since 2003, walleye populations have soared to record levels. Anglers, charter captains, and Lake Erie region tourism officials are thrilled. The walleye population in Lake Erie has exploded during the past few years and wild life managers say it will likely get better in the near future as younger fish grow to keeping size. Not everyone owns a boat but luckily there are numerous captains that operate Walleye Charters on Lake Erie.

Lake Erie is popularly known as the “Walleye capital of the world”. Multiple other locales have challenged the area but have not succeeded in dethroning Lake Erie as the capital. The consistent walleye catches that this region produces proves that it has earned its name. Walleye fishing in Lake Erie leaves draws tens of thousands of anglers each year from all over North America and the world. Even the most novice of anglers can have a great day on Lake Erie fishing with one of the great Lake Erie charter captains listed here on our site.The walleye hatches over the recent years have been extremely healthy and are currently producing some of the best walleye fishing we have seen in many decades. Now is definitely time to come and experience a Lake Erie Walleye charter.

Lake Erie fishing charters are available in each of the lake’s three regions. These regions are known as basins: the deeper Eastern Basin (Erie, Pennsylvania to Buffalo New York), the also deep Central Basin (generally greater Cleveland), and the mostly shallow Western Basin (Lake Erie Island and reef region from Toledo to Huron). The lake’s northern shore boundary is Canada. Walleye fishing in Canada is possible with the purchase of a Canadian fishing license. The southern shores are in Ohio, Pennsylvania, and New York, and on the west, there is Toledo Ohio up to Detroit Michigan.

Lake Erie is best known for its Walleye fishing but other great fishing opportunities exist. When it comes to fighting strength and for a game fishing perspective, it doesn't get much better than Smallmouth Bass. These fish are mostly catch and release and are very fun to catch due to their fighting ability. The best spots are along the rocky bottoms, reefs, the Lake Erie Island and reef area, Presque Isle are in Erie Pennsylvania and any rocky shoreline area. There are numerous Lake Erie Smallmouth Bass charters that can help you have a great day bass fishing.

Later in the summer months perch fishing on Lake Erie heats up. Perch are highly prized for their taste and are available in many area restaurants. Perch fetch up to $15.99 per pound in stores. Perch usually school up in the later summer months and fall. Perch fishing is a great way to introduce children to the sport of fishing because on a good day you can catch up to a limit of 30 perch per day and often times you can catch a double header (two perch at once!) Search our list of Lake Erie Charter captains to find and book your perch charter today.

Types of Fishing in Lake Erie

Fishing charters on Lake Erie are usually done by trolling or drifting and casting. There are dozens of options for anglers of different ages and expertise. Early season, march and April, walleye fisherman tend to jig for walleye on the reefs. This is the time of year where the trophy size walleye are caught. As the season progresses, slowly troll with planer boards at depths below 10 feet during the summer months. Walleye might be light sensitive so they bite best around dusk or dawn. When drifting captains usually set up around the reef areas (Niagara Reef and surrounding reefs) and setup drifts over the tp of the reef.When trolling, Lake Erie captains typically use dipsy or jet divers to get the bait down to where the fish are. When the season ends and the winter comes, the most hard-core anglers go ice-fishing. Lake Erie is the shallowest of the great lakes and has a tendency to kick up quickly so keep an eye on the weather. The lake being shallow also lends to being a fantastic ice fishing lake. Anglers explore the frozen lake for Walleyes with minnows on jigging lures or blade baits. If Walleye are nowhere to be found, you can try Yellow Perch with a Spreader or target Crappie.